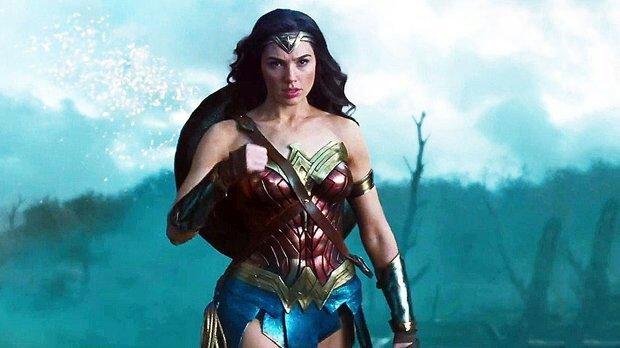 For me the most appealing part of super heroes since I was a kid is that wish-fulfillment factor. It’s that idea, that super heroes with all their great strength, speed, and agility are able to make the world a better place, and you can always depend on them to make the right choices. For children and adults, they have remained a reflection of our greater selves and an inspiration. As a young boy, there was no stronger image for me in movies than watching Christopher Reeve’s Superman fly up and save Margot Kidder’s Lois Lane from falling out of a helicopter. It filled me with that ideal that anything was possible, and it was always good to see someone do the right thing.

It’s now been ten years since “The Dark Knight” and “Iron Man” came out the same summer to phenomenal success, and since then we have had a wave of non-stop super hero films . I have enjoyed most of them to a degree, but I would say my favorite of this flock has got to be “Wonder Woman”. Part of what makes “Wonder Woman” so good is the character herself which is drawn with broad strokes the same way Reeve’s Superman was constructed. She is played here by Gal Gadot who adds a warrior’s fierceness, but also a tender warmth and humanity that, to be honest feels like a breath of fresh air in a super hero movie.

The film  begins in the mythical Island of Themiscyra, which is home of the Amazons where Wonder Woman was raised. Here she is known as Princess Diana, daughter of Hippoltya (Connie Nielson), the Queen of the Amazons. We see Diana as a young girl wanting to be trained by her warrior Aunt Antiope (Robin Wright), however her mother is reluctant, so she trains in secret. The Amazons live in peace, but there is a threat that Aries, The God of War who was cast out by Zeus will some day return to Themiscyra and Diana may be the only one who could defeat him.

But peace on the Island is brought to a halt suddenly, with the arrival of Steve Rogers (Chris Pine), a World War one pilot who crash lands on Themiscyra with an army of German soldiers behind him ready to invade. After a battle, the Amazons hear of the war going on and Diana chooses to flee with Steve where she believes she can confront Aries and destroy him, thus ending the war.

The film soon turns into a wartime adventure with Steve and Diana teaming up with some rogue spies to infiltrate a plot by the Germans to develop a new hydrogen gas which would prove deadly to the allies and prolong the war. The people behind the plot are a crazed General Ludendorff (Danny Huston) and his scientist Dr. Maru (Elena Anaya).

On the surface “Wonder Woman” is your typical super hero origin story, one we’ve seen time and time again. But the film reaches for moments of transcendence that surprised and moved me unlike any other film of the genre. The centerpiece of the film is the No Man’s Land sequence, where Diana and crew enter into the war trenches, and unable to stand the suffering any longer, she enters into the war field in all her glory deflecting bullets from enemy soldiers and winning the day. This scene is indelibly choreographed by director Patty Jenkins, as she frames Diana as that larger than life hero we have all hoped to see one day on screen. This scene is Wonder Woman’s coming out party, and it’s juxtaposed in a dreary war torn backdrop as if she is a shining light to all of the horror.

The idea of war and what it does to humanity is a major theme in the film, and Jenkins doesn’t shy away from the atrocities, at least as much as she could within the confines of a major tentpole film. We see how this affects Diana, and how she doesn’t understand the military when they want to keep the war going. Some of the most satisfying scenes come when Diana bursts into military meetings, populated by all men who make decisions on soldiers lives and begins shouting at them calling them cowards. Godot is so effective here playing it straight, and we see the pain in her eyes and the frustration of not understanding man’s want of killing people they don’t even know.

The ending of the film has come under criticism as resorting to another special effects blow out with huge explosions and CGI. That is true, however I would push back a bit that all of it is a meaningless and frezined mess, even though the villain comes off as cartoony and silly. Jenkins doesn’t forget how to frame Diana and empowering her in all of the CGI carnage. There is one image where she is running through a raging fire as if she is all ablaze with passion, which feels right from a comic book. And I felt the way she vanquishes the villain is over the top in all the right places. Again it’s that wish-fulfillment and seeing the empowerment of Diana which is the part of the point of this film. All while this is going on, there is a human drama going on with Steve and his allied sidekicks, which brings a good balance to the proceedings.

Overall, the CGI in the film didn’t bother me as much as it does in other effects driven films, even the scenes where Diana is definitely played by a computer and not Gal Gadot such as when she is jumping from frame to frame like a video game. Much of the effects add to the fantasy element, and seep in effectively for the most part. I imagine much of the backdrops of London would be matte paintings if this film was made in another era.

“Wonder Woman” was a huge success when it was first released being the most popular origin super hero movie of the time (Only recently being dethroned by “Black Panther”). It was the “Wonder Woman” story, people were hoping for. It paints in broad strokes and is simple enough for a child to understand what it’s getting across.  I guess being a boy, I related more to Superman which as I stated above was the wish-fulfillment I was looking for. “Wonder Woman” has that same effect of Superman, the idea that super heroes always know what the right thing to do is, and they do it without question. And yes I know there are super hero movies that make their characters more human by adding more personal problems and drama to their lives. That’s all well and good, but when that happens their heroism gets diluted, and they become more selfish like humans often do. Diana never looks at the world through selfish eyes, she’s here to help, and save the day, and sometimes that’s all the drama you need.