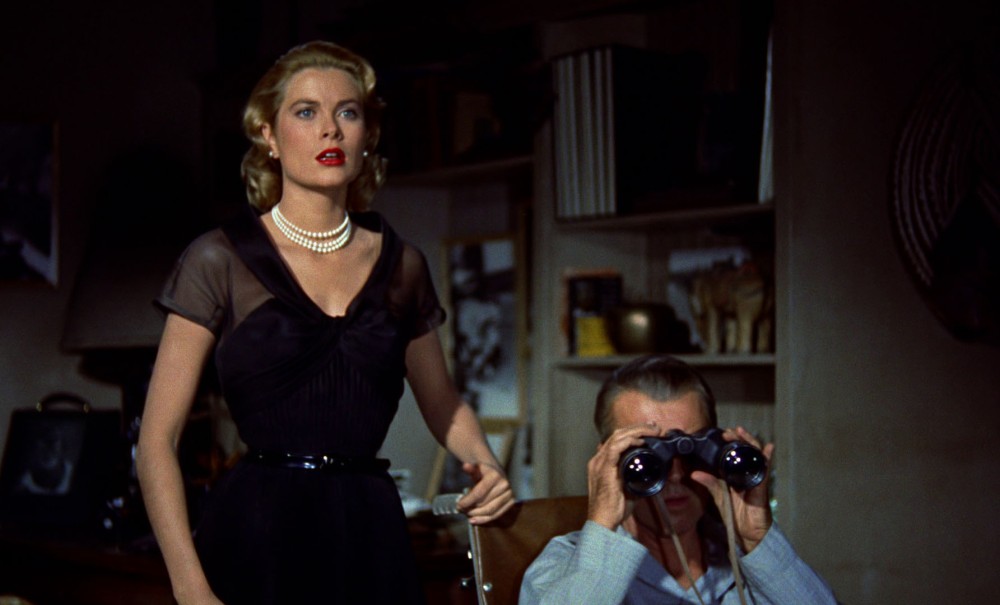 “I wonder if it’s ethical to watch a man with binoculars and a long focus lens. Do you suppose it’s ethical even if you prove that he didn’t commit a crime?” So says L.B. Jefferies (James Stewart) the hero of “Rear Window”. Maybe it’s because I’m taking an ethics class right now, or maybe because this movie has just fascinated me since I first viewed it as a teenager, but this remains to me the philosophical quandary in Alfred Hitchcock’s masterfully directed classic, my personal favorite of his, and one of the best comments of film as it applies to the audience.

Alfred Hitchcock was a director who made films for the wide audience, and “Rear Window” plays like a crowd pleasing murder mystery/thriller, with charismatic stars James Stewart and Grace Kelly taking the lead and iconic character actress Thelma Ritter tagging along as the comic relief. But “Rear Window” has depths beneath the surface that I feel Hitchcock wanted to explore, for him, he uses the framing device of a man watching his neighbours out the window whilst wondering if one of them killed his wife as a way to explore how he wants us, the audience to view his own movies.

“Rear Window” tells the story of L.B. Jefferies or Jeff (Stewart), an adventurous photographer who is recovering from a broken leg after he takes one too many risks while shooting a photo. We see from the beginning the only thing Jeff does to fill his time is look at his neighbours through his window of his Greenwich Village apartment. At first it seems harmless, many of their neighbours are carrying out their days in their usual routine, but one night Jeff hears a woman scream, and notices one of his neighbours a salesman, making curious trips out in the middle of the night. Could it be that this man may have murdered his wife? Pretty soon Jeff is playing detective with the help of his girlfriend Lisa (Kelly) and his nurse Stella (Ritter), all three of them looking out the Jeff’s window wondering what has happened to the wife, speculating where the man may have buried her, or what clues might be found inside his rose garden.

The idea Hitchcock is making with his three protagonists, but mostly Jeff is that they are fill ins for the audience. As Francois Truffaut pointed out in his indelible book of interviews about Hitchcock, entitled “Hitchcock”, he states “We’re all voyeurs to some extent, if only when we see an intimate film. And James Stewart is exactly in the position of a spectator looking at a movie.”

Hitchcock goes on to claim in the book that he believes everyone is a snooper, we simply can’t help it. Hitchcock is quoted in saying to Truffaut “I’ll bet you that nine out of ten people, if they see a woman across the courtyard undress for bed, or even a man puttering around in his room, will stay and look…” That is really the business of cinema, we are all the onlookers going into a world we are unfamiliar with because we want to look into the lives of someone else. Hitchcock sees voyeurism the same way he sees cinema, as a way to escape into another world, it points into this psychological obsession of wanting to be able to view someone else as if they don’t know we are watching them.

The idea of cinema as voyeuristic isn’t just implied by the murder mystery storyline Hitchcock establishes in the film, but the entire world seen outside of Jeff’s window. Outside we are given multiple types of human behaviour happening before Jeff’s eyes, represented by each of his neighbours. There is a musician who is frustrated while working on a new song, a lonely middle-aged woman who only wants to find love in her life,  a young married couple who have just moved in after their honeymoon, and an attractive ballet dancer who is usually seen dancing in tight outfits or having fancy cocktail parties with eligible looking bachelors. This fills in a realistic universe for Jeff to see, an uncanny one to real life if you think about how little is shown of this outside world. Hitchcock creates these little vignettes mostly through ambient sound bites from the actors playing the roles, but their lives are mostly related through us visually as if Jeff’s backyard is populated by a silent movie, Hitchcock of course believed in pure cinema and started out in silent film, so this idea that the world reflects the movie is a rather poignant metaphor within the film.

The other main angle to voyeurism comes from the relationship between Jeff and his girlfriend Lisa. The main dramatic through line in the couple’s relationship comes from the fact that Jeff isn’t sure if he wants to marry Lisa as they come from two different worlds; he’s a guerrila photographer who goes out on dangerous assignments, while she is a social butterfly who spends her time at cocktail parties and wearing fancy dresses around town. It isn’t until Lisa becomes embroiled in the murder mystery and in fact puts her own self in danger that Jeff seems to start admiring her. Take the moment where Lisa goes to deliver an envelope to the salesman’s house. Jeff looks at her through his binoculars, as she just evades meeting the would-be murderer, and when she gets back, Jeff has a look of affection that wasn’t seen since. The suggestion might be interpreted that Jeff begins falling for Lisa once she becomes part of the action he is observing, in what might be considered somewhat of a sexual kink for Jeff, he is turned on by watching Lisa in imminent danger. Take that for what you will, but I wouldn’t be too surprised if that might be what Hitchcock had in mind, considering Hitchcock’s own obsession of putting his own women in danger particularly the blondes which Lisa played by the luminous Grace Kelly very much is.

“Rear Window” of course isn’t the only time Hitchcock became obsessed with voyeurism, like all great auteurs, his themes pop up in many of his films. For Hitchcock, he always seems to see us watching, like in the nine minute long silent sequence of James Stewart (again) following Kim Novak in “Vertigo” or Anthony Perkins peeping through the small crack in the wall seeing Janet Leigh undressing, it’s all around his films, but “Rear Window” is the most explicit example on the subject. Hitchcock was one of the great filmmakers, and he understood cinema perhaps greater than anyone else, which is why his films are still studied perhaps more than anyone save Orson Welles by people who want to make movies. But Hitchcock understood his audience perhaps better than anyone else as well. Movies were like an obsession for him, which is probably why he could put himself in the audience seat more than any other filmmaker. When it came to the movies, Hitchcock knew it was a way to live out our fantasies, to live vicariously through other people’s experience, to peer into a world we don’t know, to see, to look, to watch.