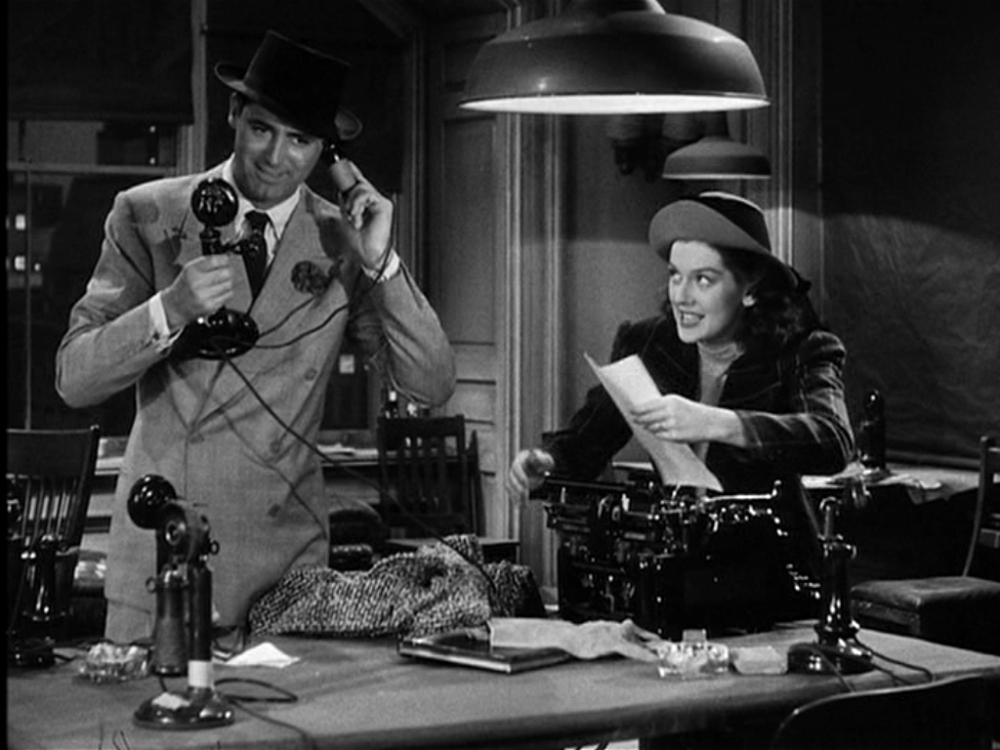 I love pretty much everything there is about “His Girl Friday”, it’s one of those perfect comedies from Hollywood’s golden age, if you look at it now, it remains very modern, but it still keeps the cool elegance of 1940s screwball comedies. The film is a love story between two people who are evenly matched in every sense of the word, gender politics never seems to be an issue between them since they look at eachother equally both as lovers or as two people doing their jobs and doing them well. They begin the film as quibbling exes who are divorced, but their flame reignite thanks to a hot newspaper story that brings them both together again. This is what falling in love in the movies is all about, when it’s conveyed in the best way, it’s exciting, it’s playful, it’s sexy, it’s sophisticated, it’s smart, and it’s oh so very entertaining.

“His Girl Friday” was adapted from a play by one of the best Hollywood writers to ever have lived, Ben Hecht entitled “The Front Page”. The play was about how a conniving newspaper editor keeps his star reporter from quitting during the story of the year by any means necessary, the difference in the play was both characters were men, in “His Girl Friday”, director Howard Hawks made the ingenious decision to change the reporter character Hildy Johnson into a woman and turning it into a love story between the editor and his star reporter. The rest of the film follows the basics of the main plot of the play, Hildy (Rosalind Russell) goes to her editor/boss Walter Burns (Cary Grant) telling him she’s quitting and is going off to get married to an insurance salesman/momma’s boy Bruce Baldwin (Ralph Bellamy) tomorrow. Walter, knowing Hildy is the best reporter he’s ever had immediately schemes to keep Hildy on the paper first by making a deal with her to write a story about accused murderer Earl Williams, who, if not found innocent soon will be sentenced to hang tomorrow at dawn. Walter agrees that if Hildy write’s the story, he’ll fill out a $20 000 insurance policy with Bruce to get her started on her new life. But Walter does not let Hildy go that easily, he seems to know better than her that being a newspaper “man”, as he calls her is what she is destined to be.

As the film goes along, Walter’s scheming  then escalate to involve ways to keep Hildy in the city newsroom writing her story on Williams, and also somehow finding ways to get Bruce arrested all the time so he fades further and further from the picture and Hildy’s life. Walter is a ruthless man without a sentimental bone in his body, but one thing’s for sure he cares about his paper, and in his own way he cares about Hildy, she may actually be the only person he even cares about or is willing to admit no matter how brief it may be.

For her part Hildy shows off pretty quickly what a skilled reporter she is, she interviews Williams and sort of manipulates it in order to write the story she wants,( no one ever says the reporters in this film are honest, and they aren’t, but that doesn’t really matter), yet Hildy ,who has learned from Walter knows how to bend the truth to get reader’s sympathies on her side, she is after all fighting for Earl’s life which I suppose is noble, on the other hand if it weren’t for the paper’s best interest to keep him alive, I’m sure Hildy would’ve written another article condemning him. But the idea that director Hawks is aiming for is Hildy’s job itself and how it defines her as a person.

Howard Hawks made many films about people who were defined by their profession, he usually found excitement in it. A lot of his films dealt with men who shared a certain camaraderie when they were working together. Yet Hawks was responsible for some of the best women characters in film history, but they seemed to be women that Hawks himself would feel an attraction to. They would be tough, and be able to give as good as they got in any situation, in other words Hawks’ women didn’t need men to look after them. The only time a man would enter the equation for a Hawks woman is if there was that mutual passion that could draw them closer to eachother like their profession, and that shared sense of experience and purpose it gives them when they do their job and do it well, that’s when the sparks fly.

But the equality is also there in the actors, look at the first and last scenes between Grant and Russel, both of which are long and dialogue heavy, but they are bouncing off eachother so well like tennis players at Wimbledon, you can actually see the fun they are having in these roles and the playfulness they are feeling in their characters. Cary Grant was and still remains one of the most underrated actors in film history, he gets accolades now by film critics in essays and think pieces, some of which claim he was the greatest movie actor of them all. It’s difficult to dispute this as you watch Grant play Walter Burns without an ounce of self-consciousness, when Grant is on camera you are watching him, when he isn’t saying anything, you are waiting for him to say something, or you are waiting for him to react in some way, because whatever he does it surprises you. There’s a gleeful delight in Grant’s performance that remains irresistible even if you stop and think how much of a despicable man Walter Burns really is, you’re rooting for Grant as you always should, Bruce really doesn’t have a chance.

But the film really is Hildy’s story, as it’s her journey into finding out who she really was all along, a newspaper “man”. Rosalind Russell matches Grant beat for beat, but unlike Burns, Hildy is able to show a bit more of a human side and we even get a sense of maybe why Hildy wants to leave the newspaper business in the first place. In probably the most serious scene in the film, Molly Malloy the girlfriend of Earl Williams, comes into the newsroom and berates the other reporters for telling lies just to sell more newspapers. Molly is taken out of the room by Hildy, where she says “They ain’t human”, to which Hildy quips back  “I know their newspaper men.” When Hildy returns to the room which was full of noise a moment ago but is now quiet with remorse, she says in an ironic tone “Gentlemen of the press”. It’s a small moment, but Russell fills it with the kind of gravity that isn’t played anywhere else in the film, and Hawks is smart enough not to play the moment sentimentally.

Hawks captures the high energy environment of a newsroom very well in “His Girl Friday” with the rapid fire dialogue. A lot has already been said throughout the years about the dialogue exchanges in the film, how Hawks kept it fast paced and overlapping, yet a word is  never lost no matter how busy the scene gets. Sometimes small bits of words can be heard over longer speeches which gives a richness and urgency to the scenes, it feels all very lived in and authentic, although I’m sure if you went to an actual newsroom, you wouldn’t see people spouting a hundred words per minute like they do in the film, then again maybe you would.

But if you think about what “His Girl Friday” is really about, it’s not so much about life in a newsroom, or a critique of it, although it does do both of those things to perfection, the film is really about not being afraid of who you are. During the film Hildy is trying to convince herself that what she needs in life is what is commonly seen as normal and acceptable; settling down with Bruce, enjoying a nice quiet life with him in Albany, with his mother, and the eventual children she plans on having with him, but that’s not what she is, and it’s plain to everyone except for her that isn’t what she is. It takes someone like Walter Burns who maybe isn’t the greatest or most moral guy in the world, but he knows who Hildy is, and his grand romantic gesture wouldn’t be getting down on one knee confessing his love for her, or even asking her to marry him, the man doesn’t even tell her he loves her ever in the film. What he does do is show her who she is, what she’s all about, what gives her life meaning and purpose. For a guy like Walter, that’s all he really has to, and for a woman like Hildy that’s all she really needs, Bruce can go home back to Albany with his mother, he’s better off there anyway.