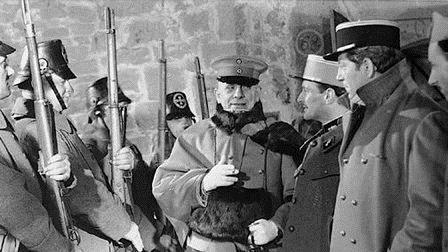 Jean Renoir’s masterpiece “La Grande Illusion” is an anti-war film, yet you won’t see any battles in it, nor a lot of blood. There are casualties, one person is shot off camera for trying to escape a POW camp, while another one is shot in a different camp while helping his comrades escape. This to me feels like a very peaceful war movie, and one that seems hopeful, if not for peace then at least for the people who have to fight for it.

“La Grande Illusion” is in the cannon of great essential films, my first viewing of it came in a film class where we were studying the poetic French realism, this film being a poster child for that movement.The film helped create the POW camp sub-genre, its influence can be felt in “Stalag 17” and especially “The Great Escape”, where those prisoners are digging a tunnel in their barracks which is not unlike the one they end up digging in this film. Yet, the genre tropes were merely a device for Renoir to explore his themes in an interesting and accessible way. It’s really about the relationships between the prisoners and their captors, how they are all similar, despite their country, their rank, or their background, he doesn’t show this in any big scenes, but in small intimate ones that can be thought of as universal beyond any country’s borders.

We follow a working class pilot Marechal (Jean Gabin) and his higher class commanding officer De Boeldieu (Pierre Fresnay) who are shot down by an aristocratic German flyer Von Ruffenstein (Erich Von Stoheim). They enter into a POW camp where they are met by a bunch of colorful French prisoners who are planning an escape. Before they are able to do so however, they are all transferred to other camps with Marechal and De Boeldieu, along with another prisoner they met, a half jewish gunner named Rosenthal (Marcel Dalio) enter into a fortress run by Von Ruffenstein who is now grounded from the air after an accident that has left him wearing a back brace; and like in the old camp the soldiers plot another escape.

The Grand Illusion in the title suggests many meanings, it’s the illusion that war solves anything, or that it should be idealised in any such way. This is shown through Marechal and Rosenthal who are both weary of the war and realize that if they escape Germany, they will only be put back in circulation as a pilot and a gunner having to fight all over again.They lack any belief that this war will find an end, but hopefully through their actions there could be an ending.

There is also an illusion of class distinction in the film brought on very memorably through the characters of De Boeldieu and Von Ruffenstein, two aristocrats who treat the war as a duty and an honor, to them being killed in combat would be a great validation. Von Ruffenstein it is clear has missed his chance to die an honorable death, he is now confined in his back brace, barely mobile and sentenced to a caretaker position in an ancient fortress, which seems to be as old as his ideals. He has a prejudice towards the lower class, all the while he treats De Boeldieu with respectability. De Boeldieu is far less delusional than Von Ruffenstein as far as class systems go, he has shared experiences with his fellow prisoners and treats them as equals even though his class somewhat isolates him from the others, he knows that his time is gone, and there isn’t much nobility left in war itself.

But the illusion Renoir breaks down most beautifully  with his multi-national characters is the barriers countries put upon the human race. “La Grande Illusion” has no good or bad characters, the Germans are not the villain, and the French are not the heroes, they are all fighting a war that has no end, all for a sense of nationalism. Renoir is able to cut down the borders and bring these people together showing their commonalities, their joys, and their sorrows, all very much alike. A wonderful scene to illustrate this is when Marechal is sentenced to solitary confinement after initializing a patriotic uproar when he finds out the French have taken over a German battleground. He has been alone for weeks and he literally cries out for some human contact, when the German soldier comes in to try and settle him, he ends up giving him a harmonica to play with. When the guard leaves the cell, he stays a moment by the door to hear Marechal play, afterwards another German officer asks what he was screaming about, to which the guard replies with “Because the war is too long”. With this small moment, Renoir breaches the political and national need of conflict by showing how both men from different warring countries can share the same sentiment.

You can feel a great need for communication in Renoir’s film, but there is also a joy of life in it too, each scene breathes life despite the death and destruction surrounding its walls, he is able to savour the light, humorous moments as well as the tender, and touching ones, he’s interested in the people not the politics.

Mind you “La Grande Illusion” was made in 1937 prior to World War II where the Nazi Regime would stomp out Renoirs ideals, and the humanity  seemed taken over by madness. Renoir knowing a conflict was coming made this film as a warning, he believed if war was not stopped, the joy of living would no longer exist. His other great film “The Rules of the Game” played with this idea of a certain way of life, a more innocent one would be extinguished with the oncoming war, it is an idea you could see worried and angered him very much.

“La Grande Illusion” is one of the great anti-war films, it feels so humble with its thematic subtleties, it doesn’t go for big gestures to get its point across, it moves like poetry in a world of madness, it might be the only war movie to celebrate how wonderful life can be and how we are all part of the human race. Renoir never subscribed to the idea of hatred in people, he was the great humanist of cinema who saw past anyone’s faults, he knew war was a futile endeavor because he felt the human race was too beautiful to be destroyed, that I suppose is something worth fighting for.